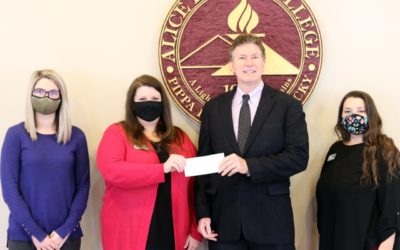 On Tuesday, November 24, Peoples Bank Foundation presented a $5,000 gift to Alice Lloyd College to support the Appalachian Leaders Scholarship Program. Peoples Bank, formerly First Commonwealth Bank, has been a friend to the college for many years. Pippa Passes:  On Thursday night, November 19th, the Alice Lloyd Eagles hosted the athletic Campbellsville-Harrodsburg University Pioneers in the final game of the month. When the dust settled, the Pippa Passes crew earned a resounding 91-70 victory. In the first... The 2020 DII Women's Volleyball National Championship will be hosted by Bob Jones University in Greenville, SC. Pool play begins on Wednesday, November 18 at 9:30 am ET and goes through Thursday, November 19. Semifinal matches will then be played on Friday, November... Recently, Alice Lloyd College’s Campus Ministry volunteered to help with maintenance work at Camp Nathaneal in Emmalena, Kentucky. With today's unusual times, the camp workers could not care for the property as well as they have in the past. ALC Campus Ministry... Joplin, MO:  The Alice Lloyd College Cross Country Team was honored today as two of their own were named to the NCCAA DII All-American squad. Only the top five finishers in the NCCAA National Cross Country Tournament receive this award, so only the absolute... Salyers finishes fifth in Women’s meet and Morris is fourth in Men’s meet. On November 10th, the Alice Lloyd Eagles hosted the Boyce College Bulldogs. In a high-scoring affair, the Eagles prevailed, 94-90. Winston Salem, NC: On November 7th, the Alice Lloyd Eagles traveled to the Tar Heel state to face an athletic Carolina University Bruins squad. In a game of runs, the Eagles prevailed, 67-64.  In the first half, the home club came out strong and sprinted to a 14-0... On Friday, November 6th, the Alice Lloyd College Lady Eagles volleyball squad, was in action in the semi-final match of the Mideast Regional Tournament. The contest was a thriller before the Michigan squad pulled out the nail-biting win. RIO GRANDE, Ohio -- WVU Tech was the big winner as they swept the 2020 River States Conference Women and Men's Cross-Country Championships hosted by the University of Rio Grande, Ohio. On the women’s side, WVU Tech posted a team score of 38 points. Midway University... We award the Male Student-Athlete of the Week honor to Corbin, Kentucky, junior Chandler Stewart. We split the Women’s Student-Athlete of the Week honor between Coeburn, Virginia, and London, Kentucky, volleyball sophomores, Reiley McCoy and Adrianna Riley. 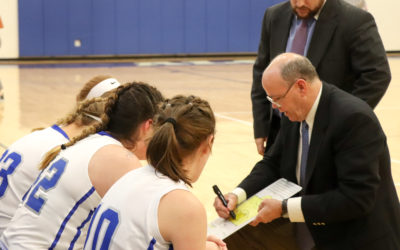 Milligan College, TN: The Alice Lloyd College Lady Eagles, under the guidance of Coach John Mills, opened the 2020-21 season on the road against a tough Milligan College Lady Buffalo squad. When the dust had settled, the visitors had earned the big 83-74 victory. In...