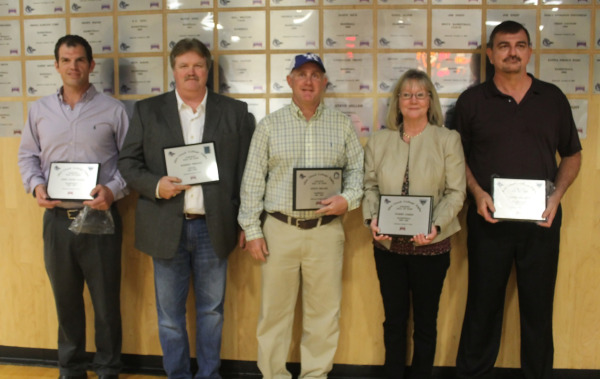 On Saturday, October 11, 2014, Alice Lloyd College took a break from the usual Appalachia Day festivities to celebrate the induction of five former athletes into its Athletics Hall of Fame.  The ceremony took place at the Grady Nutt Athletic Center on the College’s campus. Steve Miller attended Alice Lloyd from 1987-1991 where he majored in education and served as a four-year member of the Eagles baseball team. He was known for his competitiveness on the field. He was the team’s top outfielder and was the team leader in stolen bases.  Additionally, he led the conference in this category as a junior. Behind the plate, he was a solid hitter with a batting average well over .300. It was nothing for him to get a single and then steal several bases to score a key run for the team. Additionally, he was widely respected for the fierce way he played the game and he always gave his all on the field. Furthermore, he was a solid student athlete who graduated with a GPA above 3.0 .He is considered one of the top outfielders and base runners to ever wear the Eagles uniform.

He was accompanied by his wife, Mary Ann Miller, and his parents, Sammy and Sherry Miller.

Currently, Miller is employed by the Magoffin County Board of Education where he has served his community for the past twenty-three years as a teacher. He also serves as the literacy coach for all elementary schools in the county.

His plaque was presented by the president of Alice Lloyd College, Dr. Joe A. Stepp, his former coach and current Dean of Students, Mr. Scott Cornett, and the Director of Athletics, Mr. Gary D. Stepp. David Mollett attended Alice Lloyd from 1981-1985 and received his degree in education. This gentlemen played basketball where he was a starter for several seasons. He was known for his rugged, hardnosed play on both ends.

His junior season was when his game began to soar as he led the club with over 9 rebounds per game, placing him at the top spot of the KIAC leaderboard. As a senior, he emerged as the league’s premier rebounder. Despite being just 6’4, he would consistently out-rebound taller men by using his incredible quickness and excellent timing to befuddle his opposition. At the end of his senior season, he finished not only at the top of the conference in rebounds per game, but earned a spot among the nation’s best with a staggering average of 11.1 rebounds per game. This single season mark has stood the test of time as no male athlete has surpassed that average over the last thirty years.

Currently, Mollett is employed by the Mingo County Board of Education where he has served his community for the past 28 years as a teacher at Kermit Elementary School. Tammy Oakes attended Alice Lloyd from 1980-1982 just before the college became a four-year institution and received her associate’s degree in education. This lady played softball for two seasons, but left her mark as a starter on the Lady Eagles basketball squad. She was known for her play-making and leadership ability.

During her softball career, she was elected team captain both seasons and earned the Gold Glove Defensive Award. On the basketball court, however, is where she shone as she led the squad in assists. She was also among the leaders in steals and rebounds. She was selected to the KIAC All-Tournament team and received numerous awards in other tournaments as well. Her coach, Mr. Gary Gibson, said she was a true coach on the floor and was excellent at recognizing and making adjustments during ballgames. Additionally, she excelled in the classroom as she was a member of the Caney Creek Honor Society and was on the Dean’s List each semester. Furthermore, she received the Physical Education Award and graduated cum laude in 1982. It should come as no surprise that she later completed her degree and became the head women’s basketball coach at Alice Lloyd for two seasons. During that juncture, her teams compiled a 25-28 record and were known for their hard play.

Oakes was accompanied by her husband, Jim Oakes, and her sister and former ALC student, Tracey Parks. In addition, two of her best friends from her time at Alice Lloyd, Linda Squires and Kathy Belcher, were also present to share her honor.

Currently, Oakes resides in Nashville, Tennessee, where she serves her community as a Special Education teacher at Sylvan Park Paideia Elementary School. John David Slone attended ALC from 1994-1997. He was a vital three-year member of the Eagles basketball team as a power forward. He was known for his scoring ability and athleticism.

His accomplishments on the court were numerous. He shot over 40% from the three-point line during his final two seasons. He led the team in rounding his junior year and was among the team leaders throughout his time. Offensively, he averaged 16 points a game as a junior and 20 as a senior. During his sophomore and junior years, he was a major contributor and played on two national tournament teams that compiled an outstanding 52-18 record. As a senior, he ranked second in both scoring and rebounding and was among the conference leaders in both categories as well. Furthermore, he was chosen TVAC All-Conference as well as being voted Co-MVP. When he finished his athletic career, he had compiled 1064 points and nearly 600 rebounds. These totals place him among the schools elite. Academically, he finished his work at Alice Lloyd, received the Caney Cottage Scholarship, and achieved his degree in Civil Engineering from the University of Kentucky.

Slone was joined by his wife, Cassie, and his daughters, Kennedy and Tori.

Currently, he is employed by world-renowned international design-build construction firm Gray Construction of Lexington, KY, where serves as the company’s project manager. He has also competed on the Ironman Circuit for the past three years, and is currently in training for the 140-mile Ironman Wisconsin Triathlon. Additionally, he and his wife have founded The Foster Care Council, which is a charity that supports local foster children in Fayette County, Kentucky. Robert Wright attended Alice Lloyd from 1985-1990. This gentlemen played baseball, but left his mark on the Eagles tennis squad where he was known for his all-around excellent game.

During his baseball career, he was a starting pitcher for three seasons. He was elected Honorable Mention All-Conference, and received the Coaches Award his final season.

On the tennis court, however, is where he stood out. During his years in the royal blue and white, he excelled, winning a staggering fifteen individual tennis tournaments. He is widely considered the finest tennis player in school history.

Academically, Wright was a regular on the Dean’s List and graduated with a degree in education. He became a teacher in Perry County and served in this capacity for over 25 years until his recent retirement. Currently, he resides in the Ashcamp community of Pike County.

His plaque was presented by the president of Alice Lloyd College, Dr. Joe A. Stepp, his former coach and current Dean of Students, Mr. Scott Cornett, and the Director of Athletics, Mr. Gary D. Stepp.