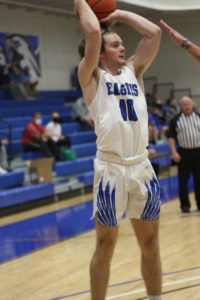 Gallatin, TN: The Alice Lloyd College Eagles, under the guidance of Coach Scott Cornett, opened the 2020-21 season by traveling to the Volunteer State to face the Welch College Flames. Although first-game jitters were evident, the Eagles placed four players in double figures to earn a nice 74-67 victory.

In the opening half, things started well for the visitors as they pulled out to a five-point cushion. The Flames regrouped and came back to take a lead of their own (24-22).

Due to the Pippa Passes squad’s cold shooting, the two clubs found themselves knotted in a 32-32 tie at half-time.

In the second half, ALC fought to regain the lead, but the home club gave their fans in attendance something to cheer about by going on a big run to pull ahead 52-45 near the 12:00 mark.

Although they were not permitted to have any visiting fans in attendance, ALC finally gave the faithful who watched on live stream something to cheer for over the final ten minutes. Junior guards Chandler Stewart and Bryce Slone led a resurgence that gave the Eagles an advantage they did not relinquish.

Then, in the final five minutes, senior point guard Noah Young expertly controlled the tempo. He received offensive assistance from strong sophomore forward Damon Tobler in sticking some important points to put the contest out of reach. ALC plays their next game on Monday, November 2nd, when they host Kentucky Christian University at 7:30 pm.