The Alice Lloyd Lady Eagles look to take the next step in their upcoming campaign. The Lady Eagles won six games last season, including a win over conference title contender Carlow University. Prior to last season, the team made some major strides, picking up the young program’s first recorded victories. Coach John Mills is looking forward to continuing the process of building up ALC’s softball program, and with each season that passes, the bar is raised higher for the following year.

“When you’re building a program, you have to take it in building blocks,” Mills says. “The first thing we wanted to do was develop a foundation. We did that the first three years that I’ve been over the program. Last year, we wanted to put the flooring in on the foundation and you do this by winning. So we know now what it is like to win and what it takes to win. This year, we want to start putting some walls up. Our goal is to win double-digit games and to finish in the middle of the conference.” 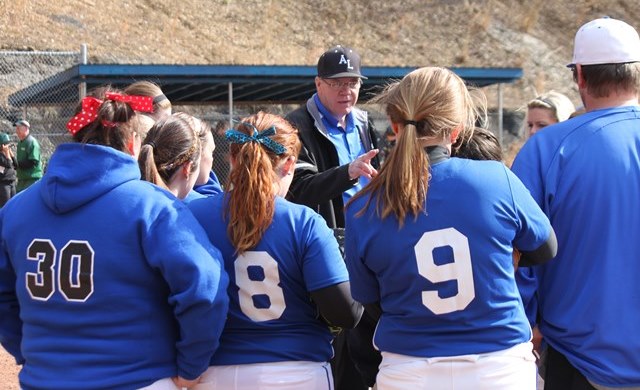 Mills was pleased with how last year’s team came together and communicated with each other. The coach expects the bonding and gelling to continue and progress this season.

“Watching the players’ mannerisms and their body language and how they interact with each other, last year’s group was really tight-knit,” the coach says. “They were coming together as a team. This year’s group is already a team. They pull for each other and they are there for each other. If someone makes a mistake, then their teammate is there to tell them that it is okay and to focus on the next play. That is what you want to see out of a group that is trying to develop and take that next step.”

Mills loves his team’s ability to generate offense and put up runs on the board.

“Our bat speed is really good. We are going to hit more hard line drives than we did last season, and we will be able to push the ball behind people to get the base runner from first to third and multiple players that can park it (hit home runs). Our one-through-seven hitters are going to be pretty solid.”

As far as the starting lineup is concerned, Mills will have six mainstay starters while the other two positions will be platooned. One player that Mills is particularly impressed with this year is Price. The coach is clearly enamored by Price’s knowledge of the game and her background.

“She has a tremendous glove,” he says, “and her softball knowledge is over the top. She can hit the ball the other way, hit for a high average and even out of the ballpark.”

Mills also liked Tailor Morgan’s ability to get the ball out of glove quickly at the shortstop position and what she brings to the plate with the bat in her hands. Morgan Chestnut has “the strongest arm on the team,” according to Mills, and she can crush the ball, too.

Stambaugh will not be the only one pitching for the Lady Eagles. Whitley Albury (sophomore from Peru, Nebraska) will be spending a lot of time on the mound, as well.

Coach Mills talked about the improvements that both pitchers made during the offseason. “Whitley has gained three miles per hour on her pitches, and her rise ball is really solid this year. Her off-speed pitches are a lot more effective, and she is a much more confident pitcher. Kayla has also gained some speed on her pitches. She is a little stronger and has more power in her legs. She gets the speed and power from her leg strength.”

“They’ve developed their conditioning better and they’ll be able to go into deeper pitch counts. Sometimes, we will need that.”

Coach Mills plans to include other players in the pitching fold, but indicated that his selections are not yet decided.