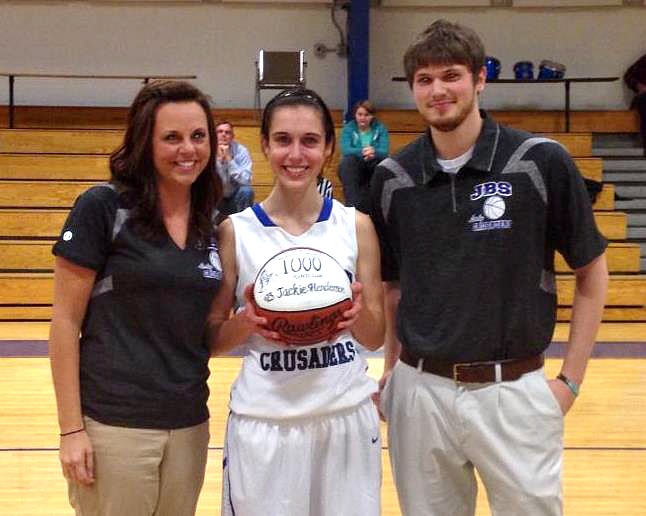 Jackie Henderson, a senior at The June Buchanan School, recently scored the 1,000th point of her high school basketball career in the Lady Crusaders’ opening game versus Riverside Christian on December 2nd, 2013.

Jackie is the daughter of Clark and Grace Henderson of Hindman, Kentucky. She has been on the JBS Lady Crusaders team since her sixth grade year in 2006. Lady Crusaders’ head coach Brandon Hayes and assistant coach Pam Frohnaple are very proud of Jackie’s accomplishment, especially at such a young age. Coach Hayes commented on how proud he was of her.

A star athlete, Jackie not only takes part in basketball, tennis, cross country, and volleyball, but she has also set new personal records and has placed in regional competitions within these various sports. Jackie, along with her doubles partner Channing Everidge, recently placed 2nd in the doubles championship at the KHSAA Regional Tennis Tournament. Jackie was also undefeated in cross country during all five seasons of her middle school career and only lost one race during her sophomore year. She also just recently completed her senior year of competition with the JBS volleyball team.

We are excited to see all of the accomplishments Jackie is yet to achieve and wish her the best with all of her future endeavors!