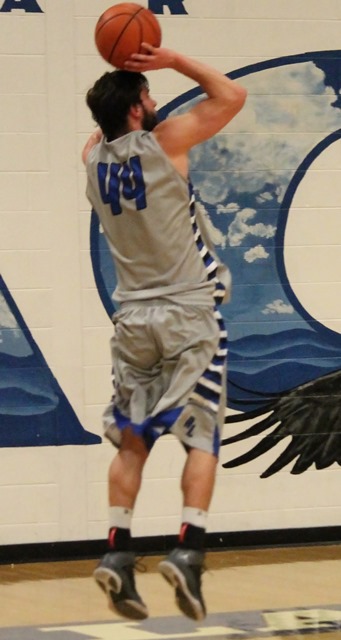 The Alice Lloyd Eagles returned to the hardwood on Saturday, January 11th, as J.R. Hammond’s squad battled the Point Park Pioneers. ALC fought off a furious rally from the team out of Pittsburgh, Pennsylvania to win by a final score of 71-68.

The home team was looking to bounce back from a tough loss to Union College earlier in the week. The Eagles were able to get off to a good start, racing out to a 13-6 edge at the 14:48 mark. After this, Alice Lloyd blitzed the Pioneers, going on a 20-7 spurt over the next seven minutes. It looked as if ALC was going to run away with the victory without any resistance from the visitors, claiming a 43-27 lead at intermission.

However, as the second half would show, Point Park was not going to go down without a fight.

The first five minutes of the second half did not go well for the Eagles as their big lead was cut down to six (49-43). ALC regrouped and rebuilt its lead to as many as eleven (62-51), but the Pioneers would not go quietly. With six minutes to play, Point Park cut into the host’s lead by engineering a 6-0 run, trimming the lead to just three points. It was evident to the anxious home crowd that the game was going to go down to the wire.

With about a minute left in the game and tied at 68, ALC’s Jordan Adkins made the play of the game by intercepting Point Park’s inbound pass to score in transition. Afterwards, the Pioneers had an opportunity to tie or take the lead, but misfired, helping the Eagles to hang on for the victory.

Senior Stuart Stamper led the charge for Alice Lloyd (8-7, 3-1 KIAC), scoring 20 points while Cody Stumbo pitched in 15. Veteran point guard Isaac Wilson had 12 points to go with 6 assists. Wilson was perfect from the free throw line, hitting 4-of-4 on the night.

The Eagles take to the court again on Tuesday, January 14th, as they battle Berea in Pippa Passes. Game time is scheduled for 8 PM.