ALC Names Alumna and Alumnus of the Year

On the evening of Friday, September 20th, Alice Lloyd College held its 17th Annual Alumna and Alumnus of the Year Banquet. This special event provides the College an opportunity to honor two of its outstanding alumni and celebrate their lives of service and leadership. Family and friends were in attendance at the banquet, which was hosted inside the College’s beautifully restored Cushing Hall.

BESSIE CONLEY DRAUGHN is a native of Floyd County and a graduate of Garrett High School. One of seven children, Bessie grew up in a family in which education was considered a priority, and she, along with most of her siblings, continued their education at Caney Junior College. In addition to earning an Associate of Arts degree in 1948, Bessie also met the love of her life, Homer Draughn, along the banks of Caney Creek. Bessie went on to receive a Bachelor of Arts degree from the University of Kentucky in 1954 and completed a Rank I in Special Education at Eastern Kentucky University in 1978. Bessie is a dedicated civic and community leader. She has served as president of the Ladies American Legion Club, the Garret Parent Teacher Association (PTA), the Floyd County Democrats Club, and secretary of the Commonwealth Life Insurance Company Organization (CLICO) Alumni Association. Bessie is also a member of the Commonwealth Insurance Retirees Association and the Professional Woman’s Club. In addition, she volunteers her time at Saint Lucke’s United Methodist Church, the American Cancer Society, Hospice of the Bluegrass, and the American Heart Association.

Bessie and Homer divide time between their homes in Lexington, Kentucky and Lake County, Florida. They especially enjoy visits with their son, Willis Conley Draughn, their daughter in-law, Shirley, and their granddaughter, Amanda.

It is not unusual for the Draughns to base their return to eastern Kentucky upon Alice Lloyd events they wish to attend. Grateful for opportunities that ALC provided her, Bessie comments: “Alice Lloyd College made it possible for me to continue my education. It also enabled me to become a teacher and provide an education to children who might not have been able to receive one otherwise.” Bessie is one of ALC’s most faithful ambassadors and supporters, and she enthusiastically shares her love for the College and the impact it had on all aspects of her life. Bessie beautifully exemplifies the true essence of The Purpose Road Philosophy. 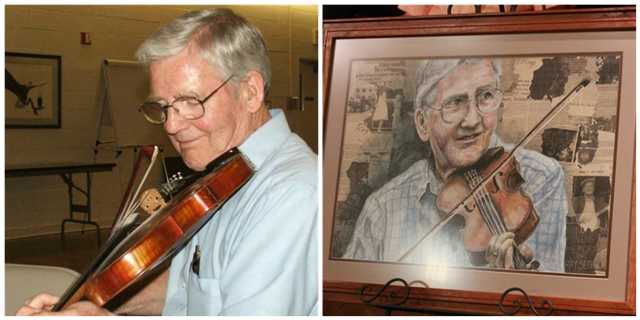 RAY SLONE was born in Knott County in 1932, and resided in Hindman for many years. He was an exceptional man who touched people of all ages and walks of life. In 2007, Ray passed on to his eternal home – however, his legacy and impact on this region continues today.

Ray attended Knott County High School. He went on to earn an Associate of Arts degree from Caney Junior College in 1953, and married his lifelong sweetheart, Wevena Hall, that same year. Ray then began his teaching career, which included several one-room schools in the area. In the early 1960s, the couple moved to Ohio so that Ray could work during the days and continue his education in the evenings. In 1963, he graduated from Defiance College with a Bachelor of Science degree in Math and History/Political Science and a Minor in English. The family returned to Kentucky, and Ray began teaching in the public school system where his kindness and commitment to education endeared him to his students and colleagues.

Ray served on many boards and was active in a number of civic organizations including Gideon’s International, the Hillfolk Arts Guild, and both Knott County and Kentucky Retired Teachers Associations. He served as Knott County Treasurer for 18 years and as Executive Director of the Knott County Housing Authority for 11 years. Together, Ray and Wevena owned and operated Ray’s Music Shop in Hindman. Ray was a devoted member of the Hindman First Baptist Church, and he was inducted into the Knott County Hall of Fame in 1996.

A gifted musician, Ray’s talent earned him frequent recognition and awards and – most importantly – inspired those around him. He enjoyed teaching music to individual students and formed The Slone Family Band with his two daughters, Carolyn and Marcia. The family performed in many venues, including the Grand Ole Opry stage – at the initiation of Bill Monroe. In 2003, Ray received a prestigious invitation to participate in the 37th annual Smithsonian International Folklife Festival in Washington, D.C., and he was awarded the Sarah Gertrude Knott Folklife Festival Award in 2007. Ray adored his family – his wife, Wevena; their two daughters, Carolyn S. Gibson and Marcia S. Thompson, and his seven grandchildren – several of whom have inherited their grandfather’s passion for music and the arts. Always grateful for the opportunity Caney Junior College provided him, Ray chose a simple path of quiet service and leadership, never seeking attention or recognition. With the utmost integrity, he instilled in others the high ideals that Alice Lloyd and The Purpose Road Philosophy had instilled in him.

President Stepp spoke about the lives of each honoree and presented them with a Certificate of Appreciation. Each of them also received a lovely Boston rocking chair with a special inscription.

Reflecting on this special occasion, Teresa Grender, ALC’s Director of Alumni Relations, said, “This year’s banquet was a special event for the College and for me, personally. Ray Slone was a gentleman I admired and respected greatly. I am so glad that his family was able to attend and accept this honor on his behalf. Bessie C. Draughn and her husband, Homer, are wonderful ambassadors and faithful supporters of ALC. I can think of no other person who is more deserving of this recognition than Bessie.”