The Alice Lloyd College Softball team, under the guidance of John Mills and Chris Slone, is pleased to announce the signing of two of the mountains’ elite softball prospects to athletic letters of intent for the upcoming 2012-13 school year. Looking to bring in a top-level pitcher, they recently inked Bell County ace Rachel Yeary. Also, joining her Lady Bobcats teammate in Pippa Passes will be catcher Kristen Slusher.

Yeary, a four-year starter for the Lady Bobcats, spent time during her career as a centerfielder and a pitcher. This season, she’s emerged as an elite fireballer and has used her fastball to guide Bell to a 14-6 record. Yeary added speed to her fastball from last year while maintaining her pinpoint accuracy. She’s also improved her stamina, which paid dividends by allowing her to pitch almost every contest. Yeary on the mound.

Yeary credits her success to a lot of hard work since the end of last season. “I practiced a whole lot more during the off season and tried to get myself in better condition,” she said. “I did a lot of running and threw a lot in pitching lessons. I was just trying to work everything out.”

She first visited the Alice Lloyd campus last fall when she met Coach John Mills. “I went up there in October. He started talking to me, said he really wanted me, and I just felt like I wanted to go there,” she added.

Yeary, who plans to study Kinesiology, has aspirations of becoming a physical therapist. She is very excited to have the opportunity to continue her playing career at the collegiate level.“I’m just looking forward to getting to play ball in college. That’s something I’ve wanted for a long time,” she said. When asked what led her to her college choice, Kristen Slusher replied, “Number one, their coach kept talking to me. Second, my best friend (Yeary) is going there. She’s going to be the pitcher, and I’m going to be the catcher; so, there’s that bond. We wanted to stay together.”

Slusher has developed into one of the most consistent power hitters in the 13th Region this year. As the number three batter in the Bell lineup, she has hit nine homeruns on the season.

J.W. Campbell, coach of the Lady Bobcats, had high praise for his star catcher. “Kristen has been a joy to coach from the time she was a freshman until now. She’s grown so much — and they do. She’s probably one of the greatest players I’ve coached, especially offensively.” Campbell added, “I really believe that if she’s not on the All-State Softball team this year then there’s no reason to have a team.” 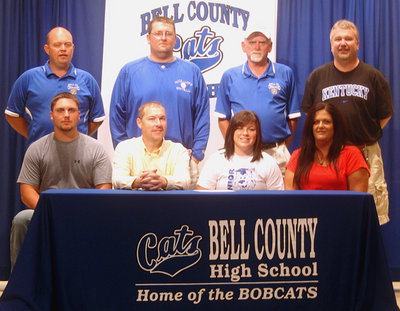 Slusher with family and coaches.

When asked how she felt about the opportunity of realizing her dream of playing on the collegiate level, Slusher said, “I just think it makes everything I’ve worked for worth it, and I am happy to be able to go on and keep playing the game I love and continue my career.”