The Alice Lloyd College Lady Eagles traveled to New Albany, Indiana to battle the defending KIAC conference champion IU Southeast Lady Grenadiers Saturday afternoon. In a contest that went down to the wire, the Eagles dropped a difficult 63-60 decision.

In the opening half, the clubs matched each other on the offensive end as they both connected on twelve field goals apiece. IUSE hit 4-9 from behind the arc, however, and led 38-32 at the break.

In the second half, the Eagles held the hosts to 7-28 shooting from the field and kept themselves in the game. The contest went down to the final seconds; but, unfortunately, the Grenadiers were able to claw out the important conference win.

For ALC (10-19, 6-4 KIAC), sophomore forward Ariel Nickell continued her excellent play as she poured in a game high 25 points and hauled down 12 rebounds. She also added 3 steals on the afternoon. 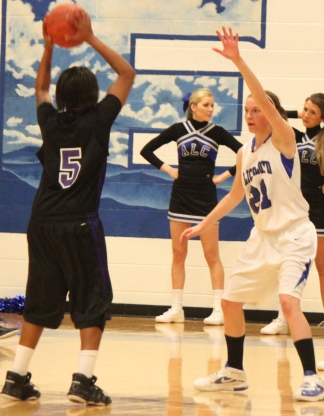 Freshman forward Chelsea Brown came off the bench to add 10 points and grab 9 rebounds of her own, while scrappy senior point guard Sarah Burchell dished off 5 assists and had 5 steals, which were both game highs.