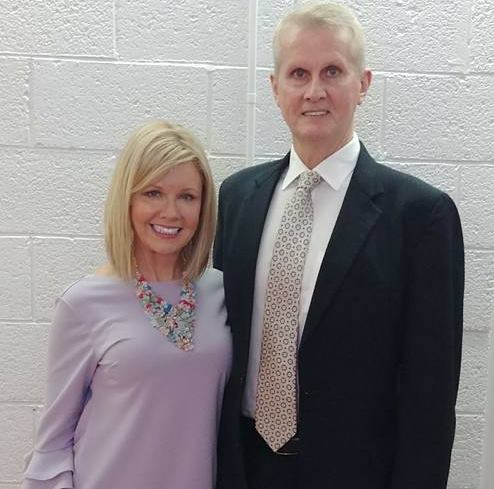 Alice Lloyd College’s first lady, Cindy Clark Stepp, was born in Hopkinsville, KY, where she lived until she attended college at Eastern Kentucky University, in Richmond, KY. While there, she earned a Bachelor’s degree in Public Relations. It was during this time that she met Joe, who was finishing his Master’s degree.

The two of them were married on September 17th, 1983, and that same year, both of them accepted positions at Alice Lloyd College. Cindy‘s first job at ALC was as an admissions counselor, a position she held for four years. Cindy began working for the June Buchanan School teaching P.E., and Journalism, a job that required less travel, before their oldest son, Clark, was born in 1989. Their youngest, Clinton, was born in 1991. After they began school, Cindy started teaching fitness classes at ALC, including kickboxing, yoga, body sculpting and weight training. She was also the cheerleading coach and dance team coach at both ALC and JBS throughout the years she was teaching the fitness classes.

In 2015, Cindy decided to pursue a job she had always dreamed of and became a flight attendant. While having the opportunity to travel was fun, Cindy decided that she spent more time on the road driving to the airport, which was 200 miles away,  than she did flying. Even though her career as a flight attendant was short-lived, she is still thankful for the experience.

Cindy‘s hobbies include reading, hiking, running, lifting weights, stand-up paddle boarding, traveling, and of course, walking her dogs! She is also hoping to learn to speak Spanish, as she occasionally travels to Honduras to work with Christian ministries there.

These days Cindy spends her time traveling with Joe to visit ALC donors, volunteering at the Floyd County Animal Shelter, and volunteering at Hazard ARH. She makes an effort to visit her parents regularly in Hopkinsville, KY. Since she and Joe recently became grandparents to a baby girl, Oaklyn Lily Stepp, on April 30, spending time with her in Knoxville, TN is a top priority! Cindy’s life of service to others has no boundaries, and she continues to look up to Mrs. Alice Lloyd as a source of inspiration with grace and dedication.

“To me, Alice Lloyd College means the future of Appalachia.  Everywhere I go in the Appalachian area, there are successful ALC graduates who are the leaders in their places of work. Mrs. Lloyd’s saying, ‘The leaders are here,’ resonates just as strongly today as when she first said it.”