The Lady Eagles came from behind and held on to earn the opening victory. The visitors would score first when junior Jada Estep led off the game with a triple and scored on a passed ball. However, Johnson quickly answered in their first at bat with three runs, to lead 3-1. ALC earned one run back in the second when Abby Stambaugh’s single drove in a run (3-2), only to see JU gain it back with a run in the third (4-2).

ALC would answer in a huge way in the fourth as eight big runs would cross the plate. Stambaugh’s double and 5 singles would provide the bounty. One inning later, Stambaugh would register her third hit and later score on a sacrifice fly. Now holding a 11-4 cushion entering the bottom of the fifth, things were looking good for ALC. Naturally, the home squad refused to go down easy. They would provide some drama by plating two runs in their next at bat and then score three more in their half of the seventh.

Fortunately, with two runners on base and the winning run at bat, pitcher Mckenzie Brewer induced a pop-up to end the contest. For ALC, Stambaugh led the way with three hits and three RBI’s. Jada Estep, Morgan Robinson, Lyndsey Adkins, and Alexis Morris added two hits apiece. Brewer earned the victory on the mound for Alice Lloyd College. She allowed nine hits while whiffing six batters. The Eagles won the hitting battle, 14-12 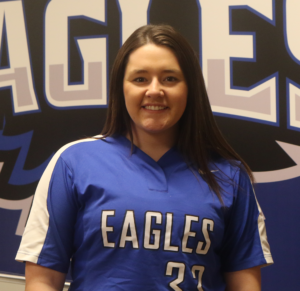 ALC looked solid at the start as they grabbed an early lead and held it for the victory. The Lady Eagles jumped out of the gates quickly as they produced one run in the opener behind an Jada Estep homer. They added two more in the second on Morgan Robinson’s single, and three in the third, with the blow being a double from sophomore Alyssa Clark (6-0). JU earned two of those back in the third only to see ALC gain it in the fourth when Robinson singled and eventually scored (7-2)

In the bottom of the seventh, the hosts would get a triple and a single to produce three runs. With two bases filled with Lady Royals, Brewer would come on in relief and induce a ground out to end the game and hand the Lady Eagles the win. For the Eagles, Robinson and Adkins both had two hits while Clark had two RBI’s. On the mound, sophomore Haley Howell pitched five- run ball over 6.2 innings to take the win. She stuck out four batters. Brewer closed the contest to earn the save. The Lady Royals outhit the Lady Eagles 12-10.