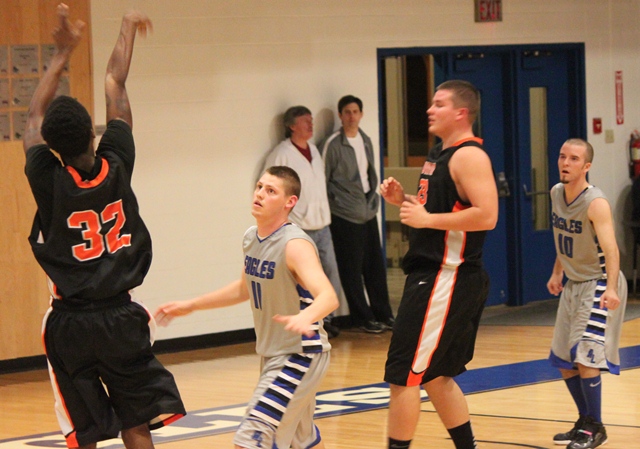 Senior guard Casey Dalton drained a three point basket with 1.2 seconds remaining in overtime to propel the Alice Lloyd College Eagles to a thrilling 90-87 win over the visiting Union College Bulldogs last night.  The first half belonged to the Eagles as they jumped out to a quick lead. Sparked by Dalton and fellow senior Brandon Hayes, ALC led 33-18 with 4:55 remaining. By intermission, they settled for a 42-29 cushion.

In the second half, both teams traded buckets for the first four minutes. Alice Lloyd had managed to increase their lead to fourteen (52-38) with 15:40 remaining.  However, over the next two minutes, the Bulldogs went on a 9-0 run to decrease the deficit to just five (52-47) with 13:34 left.  The Eagle lead hovered between 5-8 points over the next nine minutes before UC made their second run.When guard James Strange drained a three point bomb with 3:29 on the clock, Union had tied the contest at 73.

Union took their first lead on a Josh Smith bucket with 1:46 left in regulation (75-73). The squads then traded foul shots until Eagle point guard Isaac Wilson drained a huge three with 32.2 ticks on the clock to put his club ahead 80-78.  On the ensuing possession Union was fouled and sank the tying free throws at the 16.9 mark. Alice Lloyd held for the last shot, but lost control without getting a good look at the hoop.

In overtime, Union came out looking to put their hosts away. The Bulldogs bagged two three pointers in the first 30 seconds to take their largest lead of the game (86-80).  After two Eagle free throws sliced the deficit to four (86-82), Wilson stole the ball from Union guard Stuart Stamper and was fouled by Stamper on the drive to the hoop. Wilson’s acrobatic layup and ensuing charity toss reduced the margin to just one (86-85) with 1:45 left.

On their next possession, ALC came up big on defense again as Dalton knocked the ball loose. By deflecting it off a Union player, he gave the Eagles a chance to retake the lead at 1:32.  While attacking the basket, Dalton was fouled at 1:22.  He sank the second of two tosses to knot the score at 86.

After ALC forced yet another turnover (courtesy of Hayes), Eagle junior Shawn Thompson sank 1-2 free throws. This was followed by Union’s Stamper doing the same, and the score remained tied at 87.  Alice Lloyd’s Wilson had the ball with 28 seconds remaining, but was called for steps. UC then tried to run the clock down, but Ryan Young was fouled with 16.9 ticks left. He missed the bonus, giving the Eagles the chance to go for the last shot.

Wilson ran the clock down to 5 seconds before finding Dalton. The guard dribbled to the left of the key before launching a 22 footer that found the bottom of the net. Out of timeouts, UC’s, Young had no choice but to throw up a desperation prayer from three-quarters court that wasn’t close.  For the victorious Eagles (6-3), Wilson led the way with 26 points, while Dalton was close behind with 20. Hayes and Thompson were also in double figures, as the duo each added 19 points apiece.